Well, I can't honestly say I'm feeling 100% back to my normal positive self, but I do feel as though I'm getting there slowly.

I decided I needed to try something new because I'm a little fed up of working with wool and fabric, so I ordered a quilling kit. It arrived yesterday and for £11 I think it's really good value. I'm not sure if there are certain quality of tools and paper, but the basic principle seems to be rolling strips of paper up and then shaping them and what I've been sent does that just fine. 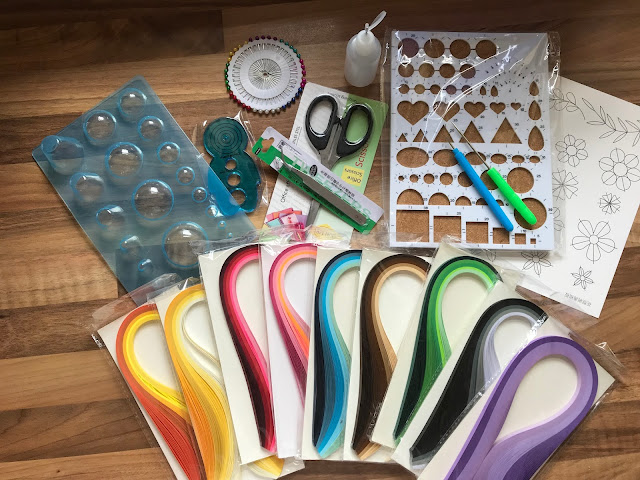 I spent a couple of hours watching YT videos and then decided to have a go at a heart because it incorporated what seem to be the 3 basic elements of making a shape, circles and scrolls. After taking the photo I changed my mind and used pink paper for the scrolls instead of green. 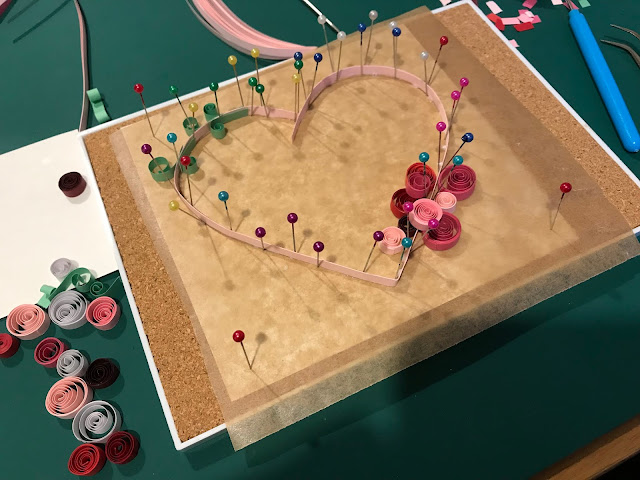 It wasn't hard but it was time consuming, which is more than fine by me. I don't want something that's over and done with in a few minutes. Building up the design felt almost like doing a jigsaw. Anyway, this is my first attempt. No idea what I'll do with it but my inner creative self is very pleased with the end product. 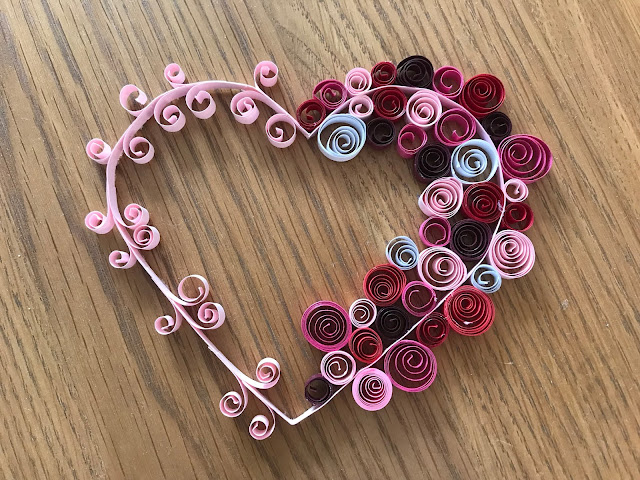 Amy starts work at a local take-away that's recently opened on Saturday. She also filled an application form in to volunteer at the foodbank and when she took it in they had a chat with her there and then and asked her to work in their 'pantry' Thursday and Friday mornings. The pantry is for people who don't need emergency food, but are still struggling so they can buy goods for a very discounted price.

I've also put her on my car insurance so she's got a bit more independence to get out and about without always relying on us. I'm really proud of everything she's achieving.

Tom went to the cinema with his friends on Saturday and had a good time. He's always on the Xbox with them, but it's nice when they occasionally meet up in the real world.

We're taking Sienna to Knowsley Safari Park tomorrow. The sea lion shows are on and the rides are open so fingers crossed it will be a pretty normal day. She won't be happy she's not coming here but taking her out is easier for us. All she wants to do here is for me to play mummy and baby with her in Amy's bedroom. She has no interest in anything else like TV, crafting, painting, games, baking so visits are hard. Even when we go to the park she constantly asks when we're coming home. Truth be told, unless we can take her out somewhere I don't have her for that very reason. Being trapped in a bedroom saying goo-goo, gah-gah for hours on end drives me nuts!

Hope you're all keeping well. xx

I'm going through a phase of 'can't be bothered to do anything because it all seems too much effort and just a tad boring'. Usually, I have the odd day here and there where I feel like this but this time it seems to be lingering. I know it will pass, it always does, but I just can't seem to find any interest in anything much lately.

I have a jigsaw, books to read, a cross stitch, sewing projects and of course the crochet. But none of them hold any appeal. I don't even want to make a video which I was really enjoying doing only a few weeks ago.

I half think it's because I'm surrounded by people who are also bored and I'm having to listen to them telling me about it. Generally, if I'm on my own I can easily entertain myself and I enjoy doing so. But I have to say I'm not enjoying the company of la famille that much at the moment. Maybe it's because we've all been in each others hair for so long with the never ending lockdown sagas of isolation. Maybe it's because the spontaneity of life seems to have been sucked out of us. Just deciding to do something on the spur of the moment doesn't seem quite so easy any more.

So if I'm quiet for a while, it's only because I'm waiting for my motivation and enthusiasm to return. Fingers crossed, it will come back sooner rather than later.

Hope you're all keeping well. x